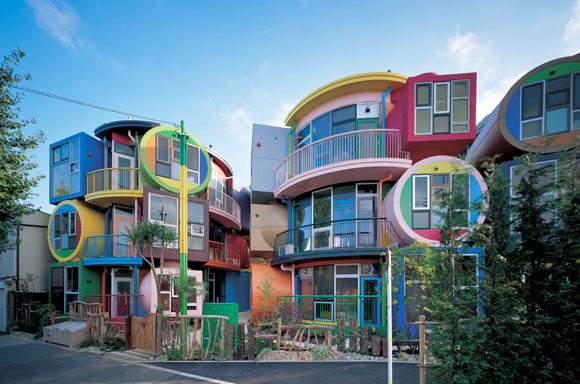 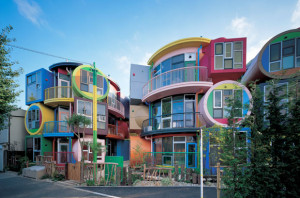 Research should no longer be done off to one side, in a school, a library or laboratory. Where one lives needs to become a laboratory for researching, for mapping directly, the living body itself, oneself as a world-forming inhabitant. (Arakawa and Gins)

I will travel with Solveig Styve Holte, Kathrine Fallmyr, Heidi Jessen (MA choreography) and Tormod Carlsen (MA theatre directing)  for a week’s residency/ field trip at the Reversible Destiny Lofts in Mitaka, a suburb of Tokyo. The lofts are  built by the artists and architects Arakawa and Gins. The residency is the first of a two-part workshop for exploring the body’s capacity to co-create event-spaces with any given environment.

The lofts, dedicated to the memory of Hellen Keller, are a physical iteration of Arakawa and Gin’s book Architectural Body (2002). They enable its complex discourses and schemas to be probed directly through the embodied experience. The purpose of the visit is to study the shared experience of cohabiting a built environment uniquely constructed to grapple with the nature of embodiment, cognition and personal action and reorient the body and its capacity to apprehend and shape the world. A perceptual approach to ‘attention’, ‘decision’ and ‘action’ is a key element of this study. Central questions are;

The project is bound up in my research in choreography as a procedure that departs from-, yet extends beyond the subjective body (of a dancer) and the production of dance, while expanding its contact area into other fields. It also constitutes a case study in research-based teaching involving students actively and directly. In both cases the intention is to propagate new sets of perceptual, cognitive and kinaesthetic tools for individual choreographic projects and interdisciplinary collaborations, dance-wise, stage-wise and otherwise.  From an international perspective the project resonates with a growing discourse about ‘expanded choreography’ fronted by, amongst others, the Swedish choreographer Mårten Spångberg. It also bears a relevance in relation to the Re:place research project initiated by KHiB in cooperation with KHiO and the Grieg Academy.

Activities will include tasks and discussions drawn from the collective experience of inhabiting two loft apartments. Several excursions and meetings will introduce the researchers to the cultural life of Tokyo. Participants are expected to keep multi-sensory and multimodal diaries, with words, drawings and video of their experiences for web-based presentation. The insights gained from the experience will be carried over into the second, six week workshop, this time in a black box setting at KHiO directly proceeding the residency.  The outcomes will be presented in an open forum at KHiO at the end of the second workshop. A presentation is also planned to take place at ANX, Oslo in the context of Re:place, led in KHiO by Ass. Prof. Synne Bull, Academy of Fine Art.

Since the mid 1990’s, when I also co-founded the live art group Motherboard (1996-2008) with Per Platou,  I have explored how networked technologies have transformed the way people work, socialize, create and share information, and organize the flow of people, ideas, and things around the globe. I have investigated how a body copes with flows of information passing between the digital, natural and lived world, grappling with how these flows shape perceptions of time, space and place. As a consequence my artistic practice once concerned with the staging of dance, has escaped into many artistic fields and scraped up against scientific ones.

The works I have created have taken on many forms, from live art happenings to site-specific and relocatable installations, and as performative interventions in public space. They are experimental and participatory, often occurring in spaces beyond those normally reserved for the arts – or to put it another way – where life happens.

From an international perspective this work, often positioned between performance, electronic and media art, now finds a landing site in a current discourse about ‘expanded choreography’. Developing new strategies and tools to bring a refreshed political/critical edge and awareness to choreography as a producer of knowledge is central to this debate.

About Arakawa and Gins
Shusaku Arakawa (b. Nagoya, Japan 1936 – 2010) and Madeline Gins (b.1941 Long Island, New York) have collaborated on a wide range of artistic, architectural, poetic and theoretical projects that are profound in their insight and influences. Arakawa had a background in science and medicine, and Gins in creative writing, literature, philosophy and painting. After meeting in New York in 1963 they soon achieved global recognition for their initial conceptual artwork The Mechanism of Meaning (1963-71). Their work is inspired by Helen Keller, the American author and political activist who lost her sight and hearing as a child. By learning how to communicate she seemed to prove that reversing one’s destiny is possible. Together they developed an esoteric philosophy of life and art, and a theory called ‘reversible destiny’. Their mission – to combat totalitarianism and outlaw aging – is voiced via numerous concurrent treatises, paintings, books and built projects.

The Architectural Body and the Reversible Destiny Lofts
Architectural Body (2002) demonstrates the inter-connectedness of architectural design, the poetic process, and philosophical inquiry. It focuses on a perceptual approach to ‘attention’, ‘decision’ and ‘action’ to set out the stakes for sustainability and improved living. Coordinating every ‘scale of action’ – from the mere ‘noticing of things’ to the ‘co-construction of the body and environment’ – form the stakes.

This work represents an important dimension within contemporary research practices. It addresses convergence and complexity across the arts and sciences on the ‘scales of action’ relevant to human experience. The refusal to reduce the terms of one discourse or experience to that of another, while always working ‘on-site where living happens’ causes the architectural body as a practice to resonate with all kinds of practitioners. Once grasped, topics such as ‘organism that persons’, ‘landing sites’ and ‘coordinology’ can be used by anybody. Rather than being recipes for making things, they are procedures to enable new connections and relationships.

The Reversible Destiny Lofts in Mitaka both embody the discourses of Architectural Body and are a physical schema and a shell-space for its practice. The peculiar three dimensionality of the lofts exposes how relationships between things and events occurring inside of it are ‘measurable’ and ‘accountable’. Designed for communal living, they are never-the-less a challenge to live in. And this is exactly the point!

The lofts stimulate the senses, and force inhabitants to use physical strength and imagination. They are made up of many coloured rooms of diverse materials, and in the form of cylinders, cubes and spheres. The rooms are distributed around a central area with a sunken kitchen and a floor that resembles miniature sand dunes. Floors and ceilings slant awkwardly. Strangely placed windows, tiny balconies, level changes and other surrealist tricks convey an off-balanced feeling of being in several places at once; of a breakdown of interior and exterior, mind, body and environment. The absence of doors challenges residents to find ways of being private. There is no furniture except for kitchen and bathroom facilities. Yet there are oddly placed power switches, and hooks and rods for suspending and reorganizing ropes, nets, swings and things – and more.

When I read Architectural Body it is with an uncanny feeling of deja vu. What is expressed is akin to the difficult-to-pin-down-and-put-words-on choreographic processes in my own work. New perspectives for articulating my choreography, and sets of tools for choreographic projects may emerge from the experience of being a loft resident-choreographer-researcher. Sharing this experience with students will form a common ground for approaching a six week workshop in choreography at KHiO directly following the visit. Here we will start in reverse; with a black box theatre as a shell-space under construction, moving tentatively towards its transformation into an event-space according to each participant’s choreographic project.

Tokyo connection
During 2012-13 I spent several months as resident artist in Tokyo where, amongst others, I was introduced to artist and complex systems scientist Prof. Takashi Ikegami, principle researcher at the Ikegami Laboratory, Tokyo University. Takashi’s passion is in discovering how life emerges, and all life, he say’s, starts with motion. Mine is in the choreography of life. It was Takashi who introduced me to the work of Arakawa and Gins, who in turn have inspired his work in both science and art.

The laboratory is highly interdisciplinary. Recent research activities investigate how non-biological artificial life can emerge in the real world. Experiments with chemicals, the internet web and artworks are just come components of the research. I visited the lab several times, where I met Takashi’s colleagues and students. I was consequently invited to spend a month at the lab in June/July 2013 to explore the potentials of developing choreographic tools on the intersections of cutting edge science and artistic practices, with an eye towards ‘attention’, ‘time’ and ‘memory’ in different natural and artificial systems. This project, and my previous visits to Japan, set a background and resources for the project Landing Sites.

The potential outcomes of the project are;